The Varieties of Democracy (V-Dem) Institute presents the Best Student Paper Award to the “author/authors of a student essay that is outstanding for its theoretical and empirical contributions.” The winner receives $500 USD and is invited to present the paper at the annual V-Dem Conference, with travel and accommodation generously provided.

The 2017 award was won by Alexander Blums, a student in the department of Politics and International Relations at the University of Southampton. The theme for the competition call was “Causes and Effects of Democratization.” Blums won with his paper entitled, “Electoral Democracy and Corruption: A Cross-National Study,” based on his dissertation research at the University of Southampton. The paper was subsequently published as an official Working Paper in the V-Dem Working Paper Series.

We asked Alexander to tell us about how this played out:

I decided to do my dissertation on cross-national predictors of corruption because I thought it was an interesting subject and my dissertation supervisor Raimondas Ibenskas is an expert in comparative politics. My main thesis was that controlling for other variables, the quality of electoral democracy explains corruption in the long and short-term. For data on democracy, I chose to utilise the V-Dem dataset. After submitting my dissertation, Raimondas (my now former supervisor) noticed that V-Dem was running a student paper competition. I made some minor modifications to better fit the requirements of the competition and a few months later received the good news about the prize. My paper was published in the ‘Users Working Paper’ series, I was given a cash prize and invited to take part in an annual conference on Democracy in Gothenburg, Sweden.

Congratulations to Alexander Blums for this much-deserved award. The Department of Politics and International Relations is very proud!

Politics students and lecturers recently got together for a rollicking pub quiz in the Nuffield Theatre cafe on campus. It was really a lot of fun, as you can see below. Many thanks to all the students who came out, and to Chris Armstrong and David Owen for writing the questions and hosting the quiz. This was our first time doing this but, given how well it went over, we’ll very likely do it again sometime! If you couldn’t make it, keep your eyes peeled for the next time we put on something like this.

YouGov recently released results from a poll designed by students in PAIR2004: Research Skills in Politics and International Relations. One of the key findings?

“18-24 year olds are more likely to emphasise the importance of their career in the next 10 years – and much more likely to consider creating a bucket list than the older generations.” 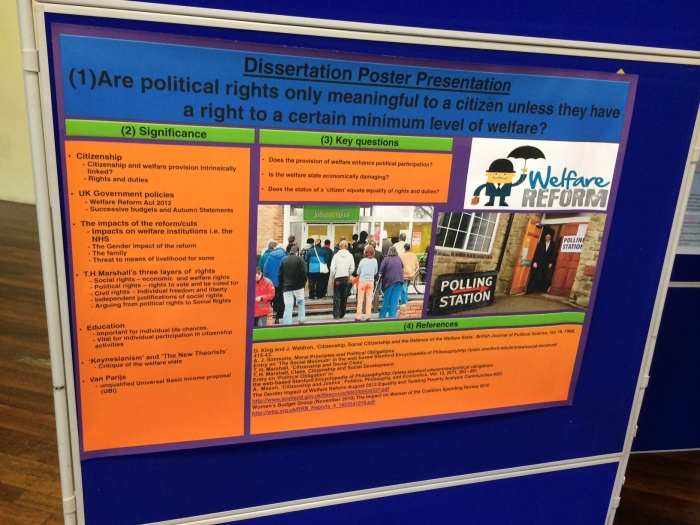 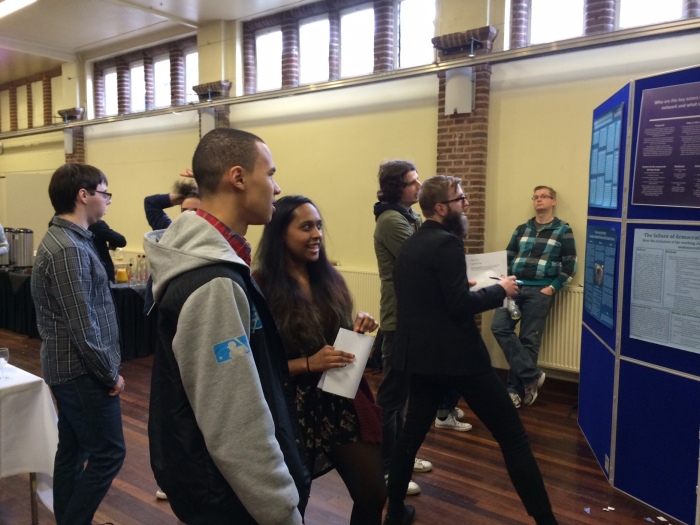 The coolest but often most challenging piece of work for undergraduates is their final year dissertation – a 10000 word paper based on their own research , conducted under supervision of a member of academic staff. The hardest part of this process often comes at the beginning. Students need to find a research question and a method of answering that question that stands up to scrutiny. One of the most difficult challenges in research is taking the questions and hunches we have about what is going on ‘out there’ in the world and turning them into research proposals – that is focused, methodical approaches to understanding the conundrums of social and political phenomena. We start out like children in a sweet shop. We want to consume all the information we can get but this would take too long and if we just try to stuff our face the conclusion won’t be much to look at anyway! At Southampton from the beginning we work closely with students to guide their research and we have introduced numerous teaching innovations to our second year methods module that I convene with @jmrphy to help them along.

Academics regularly use posters as a medium to communicate their research at conferences. They are an extremely useful and undervalued tool – they force the researcher to think carefully about how their research should appeal to an audience that is not captive (it is easier to move past a poster than walk out of a presentation). They also discipline us to think about how research can be communicated and understood quickly and easily.  This year, developing a great idea first shared by @Alison_statham at DMU (see here), we asked 2nd year students to design a poster to communicate their research proposals. On Wednesday we held a special event where they presented their posters to their colleagues (students and us staff). There was a great buzz of excitement and a superb collegiate atmosphere with students and staff feeding back to one another on research plans. We were really impressed with our students work. We certainly found that students were inspired to be creative, adding a bit of personality to their research, but also they were a lot more focused in communicating logical approaches to social inquiry. It is always a great challenge even for experienced researchers to guide students through what can be a challenging process but a very rewarding one when we see the quality of their work.

We asked some of our postgraduate students in PAIR to share their analysis of the worrying situation in Ukraine, in particular through the lenses of the International Relations theory. Here is what they say:

Charles Webb (MSc Global Politics): Over the past week or so Russian forces have been massing along the border with the Ukraine. Russian forces inside the Crimean peninsula have reportedly surrounded key Ukrainian military infrastructure. On the face of it this appears to be a blatant example of realpolitik. What the Russian Federation aims to achieve, and how, is questionable but what is actually interesting is the reminder of the fragile nature, and concept of, nationalism and ethnicity. The message from elites in the Russian administration is that this move is an attempt to protect “ethnic Russians” from Ukrainian ultra nationalists. Although both sides claim that this latest round of hostility has broken out due to the ousting of “pro-Russian” President Viktor Yanukovych this is just the latest in a long history of conflicts over territory and ethnicity. It is interesting to see the rise of chauvinist nationalism in both the Ukraine and Russia considering their long history of interconnected, and at times interdependent, coexistence. Russia and the Ukraine as we know them today are relatively new social constructs. This, so called, “crisis” is a reminder of the powerful, often irrational, and sometimes fatal, attraction of group identification termed nationalism.

Zhanarbek Janabayev (MSc Governance & Policy): Classic realist John Herz’s (1950) conception of the “security dilemma” seems appropriate in contemporary international relations. After the collapse of the Communist bloc and the dissolution of the USSR prevailed idealistic views were about the future peaceful harmonised world. They assumed the end of Russia’s domination and hegemony in post-Soviet realm. Idealists thought about the failure of the “security dilemma” and that this phenomenon is unnecessary anymore. But the recent events in Ukraine show that idealist’s expectations and predictions are utopian. Russia’s biased interpretation and misperception of Ukrainian democratic uprising against totalitarian and corrupted President Yanukovych caused serious tension between Russia and the West Alliance. Moscow escalates the situation and mistakenly considers the democratic movement as a threat to their national security (idea about possible expansion of the NATO to the East). Miscommunication, mistrust, suspicion, uncertainty and failure of diplomacy triggered Russia-Ukraine conflict. Moreover offensive realist President Putin chose aggressive imperialistic tactic of “first strike” (pre-emptive or preventive attack) and started occupation of Crimea and East part of independent Ukraine. Irrational, inadequate and illogical Russia’s foreign policy against international law might provoke the Ukrainian civil war, Russia-Ukraine war or even Third World War (involving Turkey, Poland, NATO).

John Ackom (MSc Citizenship & Democracy): The actions of the opposition/nationalists to occupy government buildings and streets/parts till the deposed presidents resigns can be explained in the light of realism which see international politics to be a constant struggle or competition in which it is not possible for all parties to benefit; one wins at the expense of the other (win-lose situation). Their decision to engage in dialogue mediated by the European Union, however, can be explained using idealism which thinks that progress is possible through cooperation and that international conflict needs concerted effort from the international community to resolve. Similarly, the Russian occupation of Crimea can be explained using idealism. The theory argues that humans are not by nature evil. Rather, it is the existence of evil institutions like military and ammunitions that provoke individuals and states alike to go to war. By this, the Russians would not have entered Crimea militarily but for their military might. The refusal of the Ukrainian military to surrender in Crimea together with the Russian invasion gives meaning to the realist prescriptions that loyalties of allies should never be assumed. Like Machiavelli, the parties seem to agree that ones national security should never be entrusted to any person (mercenaries).