By Dr Ming-chin Monique Chu, Lecturer in Chinese Politics at the University of Southampton.

Dr. Ming-chin Monique Chu, Lecturer in Chinese Politics at the Department of Politics and International Relations, University of Southampton, was invited to take part in a panel debate at Sibos 2019 held in London last week. During the debate, she shed light on the implications of Sino-U.S. high-tech cold war and other risk factors for the global financial industry. Also in the panel were Gerard Lyons (Netwealth Investments) and Elizabeth Rosenberg (Centre for a New American Security). For the recorded session at Sibos, a global financial industry event with more than 9,000 delegates held every year, see: https://www.sibos.com/media/video/big-issue-debate-navigating-era-renewed-great-power-competition-25-sept-2019.

On 28th August 2019, Monique was quoted by the South China Morning Post for an in-depth news analysis of China’s semiconductor industry: https://www.scmp.com/tech/big-tech/article/3024687/how-china-still-paying-price-squandering-its-chance-build-home-grown.

By Dr Ming-chin Monique Chu, Lecturer in Chinese Politics at the University of Southampton.

PAIR’s Dr Monique Chu spoke on the BBC World Service last week in response to an article on Chinese state media claiming Taiwan’s recently elected leader Tsai Ing-wen has an “extremist style” because she is unmarried.

Dr Chu contends that these sexist comments reflect a deep sense of anxiety and insecurity in Beijing over the election of Tsai, whose Democratic Progressive Party (DPP) has historically favoured Taiwanese independence.

You can watch the full interview below.

By Dr. John Glenn, Senior Lecturer in Politics and International Relations at the University of Southampton. You can read more posts by John here.

The New Year augured in a slew of negative economic data, both for China and the world economy in general. China’s growth rate in 2015 was the lowest in 25 years and capital outflows totalled around a trillion dollars placing further pressure on the yuan.[i] As pointed out in my latest book, although China has approximately $4 trillion worth of currency reserves, there is a limit to how much the government can intervene in the offshore yuan market and it is thus likely that further domestic devaluations of the currency will be forthcoming. This will have major ramifications for the world economy should the rest of the region follow suit and engage in competitive devaluations of their own currency. In addition, it has huge import for China’s global ambitions with regard to establishing the yuan as a major international reserve currency. Ironically, just when the IMF has included the yuan as part of the basket of currencies that states receive when borrowing from the IMF, countries are becoming increasingly wary of using the yuan because of the decline in its relative value.

Industrial overcapacity worldwide is driving the price of primary commodities and manufactured goods downwards as supply outstrips demand and leading to closures of factories in China and elsewhere. The international effects of overcapacity are being greatly exacerbated by the devaluations of the yuan and it is highly likely this will be one of the major issues that policy-makers will seek to address in the coming year. As highlighted in the book, the issue of state subsidies for China’s industries will also become one of the main issues on the global agenda in the next few years and it is likely that a concerted effort by the major powers will be made through the WTO to finally resolve this.

Pre-Tax Return on Capital in China 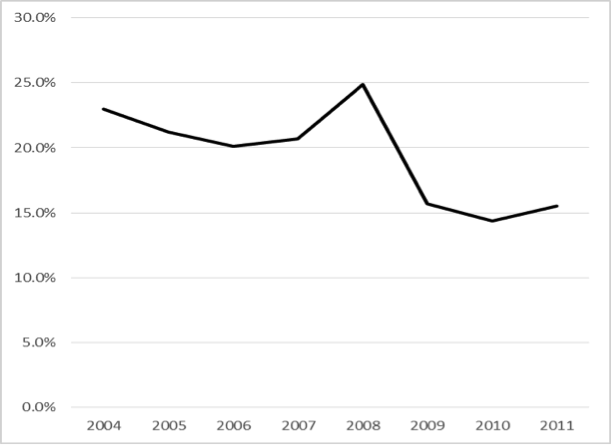 It is also highly likely that capital outflows will continue apace and may even quicken as the rate of return on investment and profits continues to fall to more normal levels (it has already declined by ten per cent from the heights of the nineties).[iii] Given that China, to some degree, still relies on technological innovation from foreign firms, this may have greater repercussions than would normally be expected.

It is notoriously difficult to predict events, none more so than at the international level. Certainly, China has been very active in the last few years in making its presence felt in the region and further afield. As this book has pointed out the creation of the Asian Infrastructure Investment Bank is not simply about providing an alternative to the World Bank. Major infrastructure projects elsewhere may help mitigate the problem of overcapacity domestically. The announcement of the ‘one belt, one road’ policy facilitating greater connections with Central Asia overland and across South Asia through to East Africa via maritime routes will not only enhance trade it will also provide major projects for China’s domestic firms. Yet, it is unlikely that this will stem further reductions in China’s growth. Whether this will lead to the ‘Japanification’ of its economy will depend upon the ability of the Chinese state to further intervene in the economy and the willingness of the other major economies to look the other way in the interests of stability. But one thing seems certain, its global ambitions and challenge to US supremacy will, for the time being at least, have to be scaled back. Moreover, if the deterioration in the economy continues, then such ambitions may have to be curtailed indefinitely.

John Glenn’s latest book, China’s Challenge to US Supremacy will be available shortly through Palgrave Macmillan.