Skip to content
HomePolling Observatory #41: Opinion stable for now, but election battle lines are being drawn

This is the forty-first in a series of posts that report on the state of the parties as measured by opinion polls. By pooling together all the available polling evidence we can reduce the impact of the random variation each individual survey inevitably produces. Most of the short term advances and setbacks in party polling fortunes are nothing more than random noise; the underlying trends – in which we are interested and which best assess the parties’ standings – are relatively stable and little influenced by day-to-day events. If there can ever be a definitive assessment of the parties’ standings, this is it. Further details of the method we use to build our estimates of public opinion can be found here. 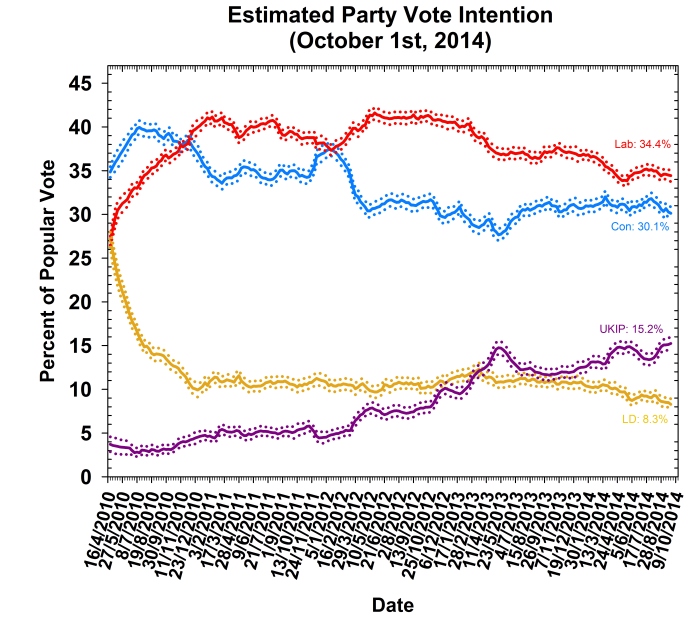 This month’s Polling Observatory update comes after another tumultuous month in British politics – one that  began with the shock defection of Conservative MP Douglas Carswell to UKIP; followed by the frantic conclusion to Scottish Independence referendum campaign, which saw the highest voter turnout seen in a post-war British election, and  immediately kicked off a new constitutional battle over ‘English votes for English laws’. After all this drama, party conference season was likely to feel anti-climatic and an anodyne Labour Party conference featuring tired activists and a flat leader’s speech delivered on this expectation. The fireworks soon began flying again, however, as Nigel Farage’s insurgents used their conference to declare war on Labour in Northern constituencies, and unveil a second Conservative defection right on the eve of the main governing party’s conference. Rumbling in the background through all this has been the steadily worsening Middle East crisis, leading to a recall of Parliament and a return of Britain to conflict in the region.  Summer silly season is definitely at an end.

Our latest report covers polling data up to October 1st – just prior to David Cameron’s speech to the Conservative Party conference, which was widely heralded in the media for its promise of jam tomorrow (future tax cuts). We therefore miss any possible conference ‘bounce’ from the speech – hinted at by three polls, two in succession by YouGov and one by Lord Ashcroft – putting the Conservatives ahead. As ever, we would be cautious about over-interpreting sudden and large movements in the polls, not least as two other polls have shown Labour maintaining their lead – and the latest YouGov poll puts Labour back two points in front. We shall see next month whether Cameron’s supposed conference ‘bounce’ holds up once the news cycle has moved on.

The big movers in September were UKIP, who gained 1.2 points, rising to 15.2%, and the Conservatives, who fell 1.1 points, down to 30.1%. The defection of two Conservative MPs – Douglas Carswell and Mark Reckless – to UKIP may therefore have led some of their fellow partisans to make a similar switch. Victories for one or both of the defectors in their new party’s colours, and the positive media coverage that would doubtless follow UKIP’s first Parliamentary wins, could encourage further moves in the polling. With constituency polls for both Clacton and Rochester & Strood currently pointing towards UKIP victories, Nigel Farage’s rebels look set to keep up the pressure on the Conservatives over the next couple of months.

Despite a lacklustre conference, our estimates see Labour stable on 34.4%, with no change from last month. As a result, Labour have preserved their fragile poll lead for another precious month. Indeed, the lead as estimated just prior to the Conservative conference was the highest we have recorded for six months, though it remains within the narrow 3 to 5 point band that it has been stuck on for most of 2014. The Liberal Democrats still face a daunting electoral challenge, with their support down 0.3 points on 8.3%.

It will be interesting to see whether the apparent conference bounce for the Conservatives is sustained at all. It is worth remembering that an 8% swing over the course of just a matter of days implies that over two million people have adjusted their voting intention in response to a single speech The empirical evidence of post-conference bounces in the polls is weak, and there is very little chance of these lasting through to election day. Most of the effects of events on public opinion are gradual and slow-moving. In this respect, it may be the tone set by Cameron’s speech – with its focus on tax cuts for middle and higher income earners and further reductions in the size of the state – which may matter most. The speech draws clear battle lines over taxation and spending for the coming election, perhaps the clearest seen for twenty years, but may also imperil the Conservatives’ hard won reputation for fiscal responsibility, as shown by the criticism of the unfunded tax cut announcements by trusted sources.  So while we are sceptical that Cameron’s speech alone has changed many minds in the last few days, it could nonetheless usher in a new phase of public opinion dynamics as voters react to the newly drawn divides between the parties.

2 thoughts on “Polling Observatory #41: Opinion stable for now, but election battle lines are being drawn”